How to prevent the frustrating Strep uberis?

Following the series of post about “Getting to know better our enemy, the Strep. uberis“, now that we’ve identified its presence it’s time to see what the experts say about preventing frustrating mastitis in dairy cows.

An intramammary infection is initially preceded by contamination of the teats or the udder surface, whereby in indoor housing the risk of contamination during the inter-milking periods is determined by the design of the lying surfaces, the space per cow, the bedding material, the frequency of bedding addition, cleaning and disinfecting as well as the cows´ length of stay in the cubicles.

The fact that the rate of infection with environmental bovine mastitis is highest during the summer months accounts for increased bacterial counts in the bedding material. The indicator for the optimization effort in hygiene of the resting area is the cleanliness of the teats.

The objective should be for more than 90% of the animals to have only a few coarse dirt particles on the teats, which can be removed by simply wiping with a disposable towel or something similar. Feeding imbalances as well as fluctuations in the dry matter intake of the animals seem to be associated with the exacerbation of clinical Strep. uberis mastitis in dairy cows.

Machine milking can lead to the invasion of Strep. uberis into the glands, which can be avoided by carefully cleaning the teats prior to milking. This can, but does not have to, be carried out by means of disinfecting measures before milking.

A crucial point is that about 95% of the teats leave no or only slightly yellowish residues on the disinfecting cloth with which they have had contact before the milking clusters are attached.

Careful cleaning of the milking machine can be crucial when preventing mastitis in dairy cows.

The administration of oxytocin or performing additional milkings is not recommended, as these measures additionally increase the proliferation rate of Strep. uberis in the mammary gland. The successful treatment of intramammary infections caused by Strep. uberis is crucial in the dry period (antibiotic dry cow therapy and the prevention of such infections in the same period (teat sealer, hygienic husbandry conditions, control of hypocalcaemia, avoidance of loss of body mass during the dry period)) and lactation.

Strep. uberis is one of the most important causative pathogens for clinical mastitis in dairy cows, and in many countries of the world, responsible for as many as one third of all clinical bovine mastitis cases. Strep. uberis is known for a set of virulence factors including biofilm formation. It is a ubiquitous microorganism, which colonizes animals as well as their environment.

The cases of clinical mastitis caused by Strep. uberis are clearly associated with hygiene (cleanliness and dryness) in husbandry, feeding and machine milking. (Extended) antibiotic therapy is effective but is often followed by new infections, often with another Strep. uberis strain.

Therefore, an effective vaccine, which primarily reduces the clinical exacerbation, would be of great benefit.

Mastitis in cattle: What has changed in dairy management?

Here is the interview with Mr. Peter Edmondson (owner of the company Udderwise), in which he reviewed the major changes that he has seen …
Read more 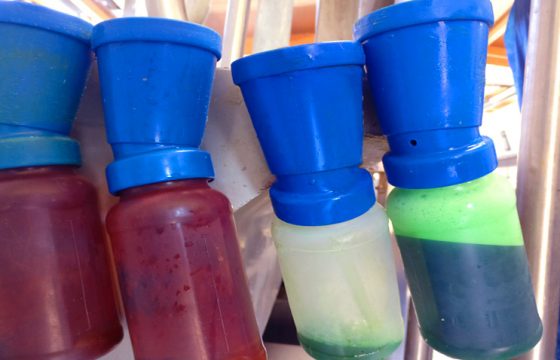