Coliform Mastitis: Why it happens to my best cows? (Part 2)

We all know that by the time we reach the point of needing to treat a disease, it is because something has gone wrong with disease prevention. In the case of bovine mastitis caused by coliforms, we have a wide variety of strategies and concrete actions to prevent it. Here is a list of the most effective ones!

Given the low efficiency of any treatment against the hyperacute colibacillary bovine mastitis, prevention is the best possible treatment.

Knowing the periods of greatest risk and predisposing factors, prevention strategies, are mainly focused on 2 routes:

1) Minimize exposure of the teat tip to bacteria present in the environment:

Especially drying yards, during pre- and post- partum since these are the periods of maximum risk of intramammary infection by coliforms. Clean dry cubicles or beds are key to prevent the proliferation of E. coli in resting areas. Inert materials such as sand or marble dust are more suitable when compared to other bedding materials such as straw, sawdust or husks because bacteria proliferate less.

Cleaning and disinfecting the udder before connecting the milking cluster to the animal is very important to avoid this kind of infections. Forestripping and predipping are the most effective techniques to help you to detect the symptoms of bovine mastitis and to reduce the contamination of teats.

2) Increase the animal’s resistance to infection:

Levels of cortisol experience a sharp physiological increase, which is needed for the development of the delivery and colostrogenesis.
This same cortisol inhibits the inflammatory response and adversely affects the function of the neutrophils fighting infections.

This kind of actions help to minimize the NEB (Negative Energy Balance) and its duration. The objective is to maximize intake of dry matter.

Securing the necessary intake of Vitamin E and Se in the ration; they are important for the immune system and increasing the phagocytary activity of neutrophils. A state of deficiency of these elements increases the likelihood of suffering from bovine mastitis, as well as the severity and duration of infection.

The most widely used vaccines are based on the J5 strain of E. coli. This strain is a mutant that lacks the O-polysaccharide chain of the LPS, leaving the LPS antigen core exposed to the immune system. Unlike the O-polysaccharide chain, the composition and structure of the antigen core is highly conserved among the various Gram- negative bacteria, so vaccines with J5 induce opsonising “anti-core” antibodies with cross- immunity against different strains of E. coli and other Gram-negative bacteria.

The efficacy of vaccination in protecting against acute colibacillary mastitis has been demonstrated in several field studies.

In many references, it is clear that immunization with J5 does not prevent coliform intramammary infections, but does reduce the severity, the onset of clinical cases and economic losses from death or slaughter.

According to economic studies conducted in the USA, a vaccine against this type of mastitis is economically profitable if more than 1% of lactations are affected by colibacillary bovine mastitis.

According to the literature, vaccination against bovine mastitis can be an important tool in preventing mastitis caused by Gram-negative bacteria on farms where there is such a problem.

Considering that the post-partum period is the most critical and where there are most cases for the reasons already mentioned, the goal should be to strengthen immunity in that period.

Colibacillary mastitis is an important pathological condition on many farms due to the economic impact it implies.

Prevention is the best tool to control this problem. The management of the dry period and the peripartum phase is crucial.

Cows housed in clean, dry and comfortable cubicles and yards will have reduced intramammary coliform infections.

Finally, it should be noted that a vaccination protocol in the drying period can help to prevent clinical cases of coliform on farms where there is a problem. 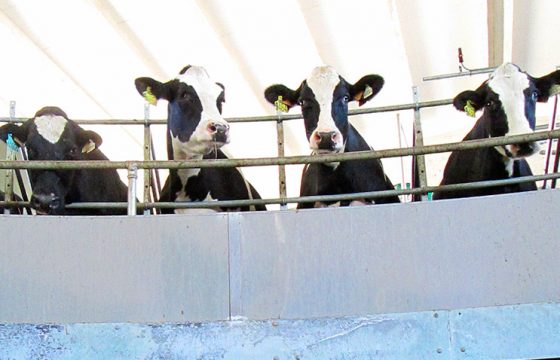 Milk management: What’s the best teat dip to use?

The best teat dip is the best that you can afford and that addresses the majority of your problems on the farm. …
Read more